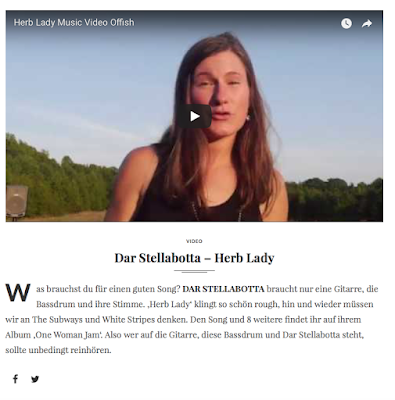 So here is a review from a German blog .
Here is it translated:What do you need for a good song? DAR STELLABOTTA needs only one guitar, the bass drum and her voice. 'Herb Lady' sounds so pretty rough, every now and then we have to think about The Subways and White Stripes. The song and 8 more can be found on their album 'One Woman Jam'. So who's on the guitar, this bass drum and Dar Stellabotta, should definitely listen.

Original link: http://welovethat.de/2017/dar-stellabotta-herb-lady/Order or listen to the CD here www.darstellabotta.com
Posted by Dar Stellabotta at 4:19 PM No comments: 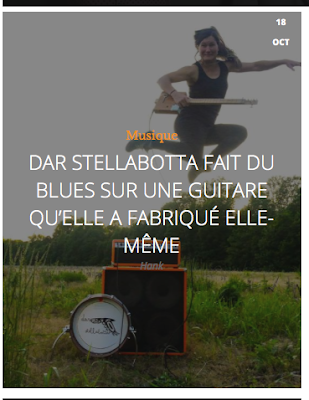 So I translted this review for everyone but please do check out the original link as well. Thanks!


DAR STELLABOTTA MADE THE BLUES ON A GUITAR THAT SHE MADE HERSELF
Wednesday, October 18, 2017
Dar Stellabotta made the blues on a guitar that she made herself
Dar Stellabotta is a blueswoman who made her own guitar with a cigar box. Alone on stage with a bass drum on which she beats the rhythm and voice to the nasal accent, the artist has released a full album of feeling early. Big crush!
Miles away from my usual passions, Dar Stellabotta is an artist who won me over immediately. I watched the video of 'Herb Lady' and I loved this sound that reminded me of the first albums of Ben Harper, Brother Dege music and of course Muddy Waters. Like the latter, Dar Stellabotta play the Cigar Box Guitar, an instrument whose trunk is a cigar box. The young woman has made herself this instrument, she explains the methodology on its facebook page and if you are not handy enough to build your own instrument, Dar Stellabotta also sells. A first album called One Woman Jam was released in September 2017 with nine titles organic and full of feeling. For my part, it is with 'Herb Lady' I discovered the disc, and even if I then had a big crush on 'Barren' or 'Grim Reaper', I still propose to start with 'Herb Lady', because the artist was loaned to an exercise in style by offering YouTube amplified version and an acoustic version of the song. We listen to the amplified here:
https://soundcloud.com/dar-stellabotta/herb-lady-1
Of course, it's more fun in pictures (with the acoustic version of 'Herb Lady', but there is also a video of the amplified version): https://youtu.be/OETpcGJA3Pk
In addition to the immediate pleasure of listening, I also like the Dar Stellabotta project because it shows you can be a one-woman band and render a rich and rhythmic atmosphere without appeal to electronics to overcome the lack of a drummer. In the purest tradition of the men of the Orchestra, Dar Stellabotta has need of a speaker, an amplifier, a microphone, her cigar box guitar and her bass drum to pulverise the filly.
If you share you're fan of Phil Collins
Original link http://anotherwhiskyformisterbukowski.com/2017/10/18/dar-stellabotta-blues-guitare/
Posted by Dar Stellabotta at 6:22 PM No comments:

Made it to CBG Review Magazine! 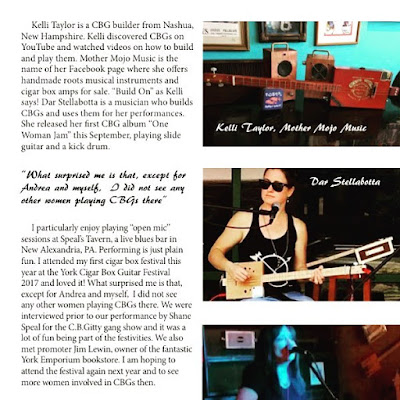 Posted by Dar Stellabotta at 9:02 AM No comments:

Great plug from Adobe and Teardrops!

Please check out this blog everybody. They got it going on over there, spreading the love of the Universe. Adobe and Teardrops A must for all music lovers.

"Herb Lady" is a complete shredder played on Stellabotta's homemade cigar box guitar.-Adobe and Teardrops
Posted by Dar Stellabotta at 9:16 PM No comments: