Review of Broke in the USA by MICHAEL DOHERTY 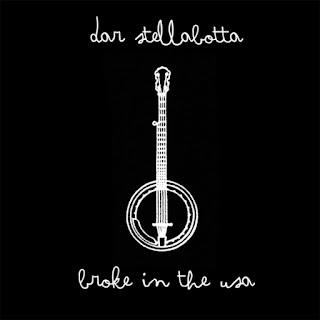 Dar Stellabotta is a folk artist based in Huntingtown, Maryland, playing banjo and guitar to accompany her vocals. Her new CD, Broke In The USA, has a cool, unpolished, raw vibe. It’s like banjo played with punk sensibilities, with an immediate, honest, unapologetic sound.

This EP kicks off with “Rachael Joined The Machine,” which has my favorite title of the album, and is one of my favorite tunes as well. This song is banjo and vocals, and yet has something of a blues feel, with lines like “I need a haircut” and “I am broke and I need new shoes.” And check out these lines: “My friend Rachael joined the race/I ain’t seen her in a decade/You know what I mean, know what I mean/Know what I mean, know what I mean/Rachael, my friend Rachael, joined the machine.” That’s followed by “Brother Ray,” which is a more energetic song, with percussion. The vocals are delivered with a punk energy and attitude. “I think it’s about time for some dancing again.” Oh yes. And then “Lost In The Dirt” has some simple, steady strumming, which gives a stronger focus to the vocals and to the lyrics. “I was born this way/Can’t seem to find a better way/’Cause the sun won’t shine for the sinners out there/You’d better watch out, you’d better take care.”

The first song I heard from this CD was “Fountain Of Youth,” and it’s the one that got me interested in this artist. It remains one of my favorites, and I actually like it more and more each time I listen to this disc. There is something of a fuller and sweeter sound to this one, and a really nice instrumental section at the end. “’Cause you’ve been going too long and too hard/To give up now/You want to stop/But you don’t know how.” My other favorite is the CD’s closing track, “Old With You,” a love song that is as much about love itself as it is about a specific love. The sound of this one just makes me happy. There is a sweetness and innocence to this song that is delightful as she sings, “I don’t need much to get me through this life/All I need is you and a warm blanket at night/A cold glass of water and some foot-stompin’ tunes/A nice warm meal and running water in my room.” And: “Some people think love is a fairy tale/To get to heaven you gotta trek through hell/I just want to grow old with you.”

CD Track List
Broke In The USA was released in March of 2016, and is available as a free download on Dar Stellabotta’s website. By the way, she is also a silk screen artist, and you can check out her work on that website as well.
POSTED BY MICHAEL DOHERTY AT 5:19 PM